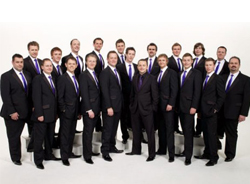 After winning BBC's Last Choir Standing in 2008, Only Men Aloud signed a five record deal with Universal Music. They have performed with the likes of Josh Groban and Bonnie Tyler and have completed four UK tours.

Only Men Aloud were winners at the 2010 Classical BRIT Awards, where they scooped the award for NS&I Album of the Year. Musical director Tim Rhys Evans said: "To win a Classical Brit is a dream that I hadn't even dared to dream. I feel like we've won the Oscars of the classical world."

Only Men Aloud will embark on their first UK tour for two years, when they perform at venues across the country in December 2013.