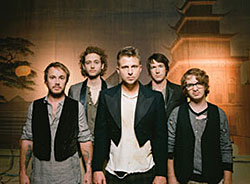 American rock band One Republic became an international success after releasing the hit singles Apologize and Stop and Stare in 2007. The five-piece band from Colorado Springs formed in 2003 and first achieved commercial success on MySpace as an unsigned act.

One Republic performed a series of gigs across the UK & Ireland during March 2014, as part of the band's 'Native Tour'.