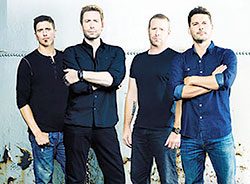 Nickelback was formed by the Kroeger Brothers and Ryan Peake in 1995, and is one of Canada's most successful rock bands. The band's many hits include: How You Remind Me, Photograph, Burn It To The Ground and Rockstar.