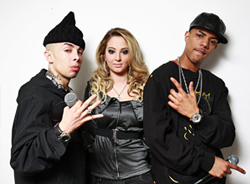 British Hip-Hop sensation N-Dubz originally found exposure on pirate radio, but have since released some of the best-selling singles of the past few years. Their 2009 album, Against All Odds, achieved platinum status in under a month.

The group consists of Dappy, Tulisa (cousins) and Fazer who were all born in Camden Town, London. N-Dubz have won four MOBO Awards, including Best Album for Uncle B.