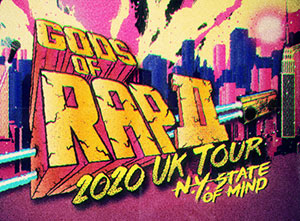 Nas, DMX, The Lox and Gang Starr will come together for a very special UK tour in April 2020. The hip hop icons will play shows in Manchester, London and Birmingham during the Gods of Rap II: N.Y. State of Mind UK tour. Hosted and presented by Just Blaze.

How to buy Gods of Rap II tickets?

Tickets for the Gods of Rap II UK tour went on general sale on Friday 31st January, priced from £42.50 plus fees, at Ticketmaster.co.uk and SeeTickets.com.