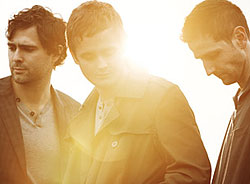 Keane were responsible for 2004's best-selling album, Hopes and Fears. The award-winning group continued to produce influential tracks on their later albums: Under The Iron Sea and Perfect Symmetry. Keane have toured the UK extensively following the release of each album.

Keane toured the UK & Ireland during November and December 2012 in support of their fourth chart-topping studio album - Strangeland.