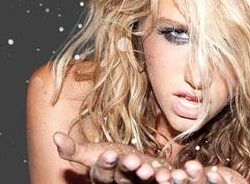 Kesha made her breakthrough in 2009 singing alongside Flo Rida on his hit single Right Round. Kesha's debut single, Tik Tok, hit the number one spot in several countries. Kesha's debut album, Animal, was released in early 2010 and went straight to number one in the US Billboard Chart.