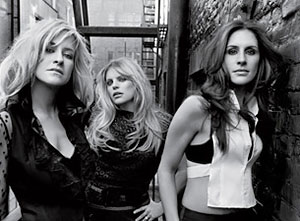 With over 30 million albums sold, Dixie Chicks are the biggest selling female band of all time in the US.