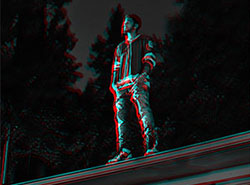 J Cole performed a handful of UK shows in May 2015 as part of his Forest Hills Drive European tour.