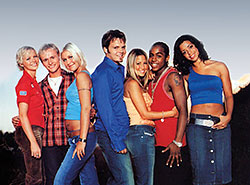 S Club 7 were formed in the late 1990s as a 7-piece pop group with an accompanying TV show. The format was very successful and, during the five years that the group was together, they had four UK No.1 singles and one UK No.1 album to celebrate.

In November 2014, the group – consisting of Rachel Stevens, Jo O'Meara, Tina Barrett, Paul Cattermole, Bradley McIntosh, Jon Lee and Hannah Spearitt – got back together for a live performance on the BBC's Children in Need appeal.

S Club 7 completed a reunion tour in May 2015. The group performed at several arenas across the UK during the Bring It All Back Tour.