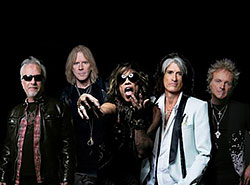 Aerosmith is one of America's finest musical exports, producing countless hits such as Love in an Elevator, Dude (Looks Like a Lady) and Angel. The band also had a smash hit with I Don't Want To Miss a Thing from the soundtack to the film Armageddon.

Aerosmith's 15th studio album, Music from Another Dimension!, was released in November 2012. The band are currently in the middle of their Global Warming Tour which began in May 2012.

Aerosmith was the headline act at Download Festival (Donington Park) on Sunday 15th June, and at the new Calling Festival (Clapham Common) on Saturday 28th June 2014.