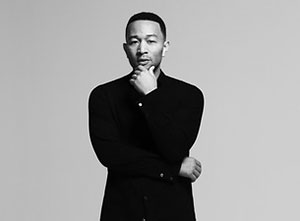 John Legend is a Grammy Award-winning American singer-songwriter, who is known for his heartfelt songwriting and soulful singing. As well as being a successful recording artist in his own right, John has collaborated with many other well known artists on chart-topping tracks.

John Legend returns to the UK in the autumn of 2017 on his Darkness and Light Tour.