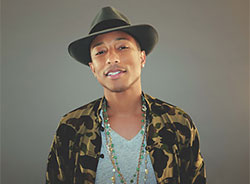 Pharrell Williams is a Grammy Award winning singer-songwriter, rapper, record producer and fashion designer. Pharrell has produced and featured on a huge number of records with other artists. He has also released two albums as a solo artist: In My Mind (2006) and Girl (2014).

In November 2013 Pharrell released the lead single, Happy, from his second solo album. The single was a massive hit – selling several million copies and topping charts across the world.

Pharrell Williams performed concerts in Manchester and London during the autumn of 2014, as part of his Dear G I R L solo European tour.

Pharrell Williams will return to the UK in the summer of 2015 for an exclusive arena show in Leeds, plus a performance at the Isle of Wight Festival.