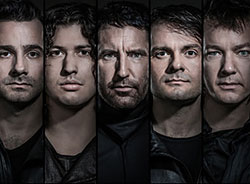 Nine Inch Nails was created by Trent Reznor in 1988 as an industrial rock project. Reznor continues to lead the band as its only official member. Nine Inch Nails is considered a pioneer in the industrial music movement, having been highly influential in the evolution of electronic music over the past 25 years.

After a three-year hiatus, the band's eighth studio album, Hesitation Marks, was released in September 2013 to critical acclaim.

Nine Inch Nails last toured the UK's arenas in May 2014 as part of a wider European tour, with support from Cold Cave.