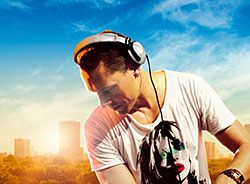 Dutch DJ and producer Tiesto released his debut studio album, In My Memory, in 2001. The album produced five major hit singles, which helped to launch Tiesto's career as a superstar DJ.

Tiesto was named "No.1 DJ in the World" by DJMag for three consecutive years, from 2002 to 2004. Since then he has never been out of the top 3 ranked DJs according to the magazine.

Tiesto teamed up with fellow superstar DJ Calvin Harris for a five-city tour of the UK and Ireland in late 2013.