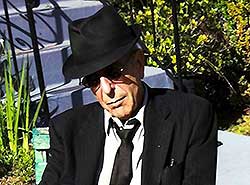 Leonard Cohen is an award-winning Canadian singer-songwriter, musician, poet and novelist. Now in his late-70s, Leonard Cohen has released 12 studio albums. His most recent record, Old Ideas, reached No. 2 in the UK album chart in 2012.

Following a 15-year hiatus, Leonard Cohen returned to the live stage in 2008 and received critical acclaim for his performances.

Leonard Cohen has a UK arena tour planned for August and September 2013, when he will visit seven venues across the country.