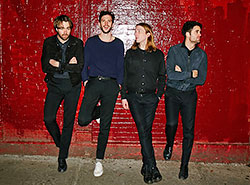 English indie rock band The Vaccines formed in 2010 and released their debut album, What Did You Expect From The Vaccines?, in March 2011 – reaching No.4 in the UK album chart.

The band's second album, Come of Age, went straight to No.1 in the UK chart following its release in September 2012. A third studio album, English Graffiti, was released in May 2015.

The Vaccines last toured the UK in November and December 2015 – when they visited Wolverhampton, Brighton, Nottingham, London, Leeds, Bournemouth, Cardiff, Plymouth and Blackpool.