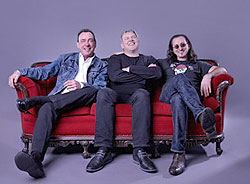 Canadian rock band Rush is considered to be one of the most progressive and popular rock bands on the planet. The trio – consisting of Geddy Lee, Alex Lifeson, and Neil Peart – have sold more than 40 million records worldwide thanks to their inventive musicianship and intelligent lyrics.

Rush has a massive cult following, which ensures that every tour the band undertakes is pretty much guaranteed to be a sell-out. Rush's last UK tour was in 2011, when the band brought the Time Machine Tour to these shores.

Rush will return to the UK in May 2013 when the trio will perform a series of arena shows in support of their 20th studio album, Clockwork Angels, which is due for release in June.