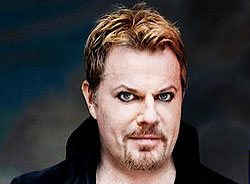 Multi-award winning comedian Eddie Izzard is well known and loved for his rambling, whimsical style of stand-up comedy. Eddie has also racked up an impressive number of film credits during his career, appearing in numerous films including Ocean's Twelve, Ocean's Thirteen and Valkyrie.

Eddie's last UK tour was back in 2009, when he performed his stand-up routine Stripped across the UK.

Eddie Izzard will be back performing in the UK's arenas again in May and June of 2013, as part of his Force Majeure world tour.