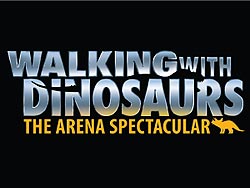 Walking with Dinosaurs was the hugely successful BBC TV series which first aired in 1999. The series recreated the lives of prehistoric creatures using CGI and animatronics, and was one of the most expensive documentaries ever made.

Walking with Dinosaurs - The Arena Spectacular is a live stage adaptation of the documentary series. A team of internationally renowned designers have created 20 life size dinosaurs which will be stomping around the UK's biggest arenas in 2013.