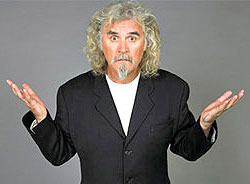 Comedian, musician, presenter and actor...Billy Connolly is one of Scotland's best loved and funniest entertainers. Most recently viewers will have seen 'The Big Yin' thundering across America on his motor-trike in the ITV series Billy Connolly's Route 66.

In 2012 Billy Connolly will return to what he does best - entertaining the masses with his hilarious stand-up comedy routines. Billy Connolly's new tour, simply titled The Man, will visit venues across the UK during January, February and March 2012.