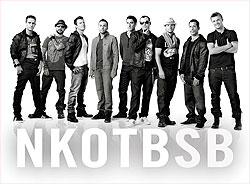 The NKOTBSB Tour is a co-headlining tour between two of America's most successful boy bands: New Kids on the Block and the Backstreet Boys. The boy bands initially joined forces for a North American tour during the spring and summer of 2011. However, there are now plans to extend the tour worldwide.

In the spring of 2012 the NKOTBSB Tour will visit Europe for a series of arena shows, including several shows planned for arenas in the UK and Ireland.