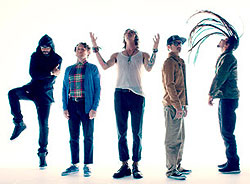 Incubus is a critically acclaimed alternative rock band hailing from California. The band's seventh studio album, If Not Now, When?, was released in July 2011. Incubus then embarked on a world wide tour in support of the record.

Incubus last toured the UK during the autumn of 2011, performing at several venues across the country.