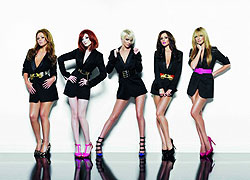 Girls Aloud was the product of ITV's Pop Stars: The Rivals in 2002. Following a string of top ten hits, the girls won a BRIT Award in 2009 for their number one single The Promise. Between 2009 and 2012 the band was on a hiatus whilst the girls took time out to pursue solo projects.

At a press conference in October 2012, Cheryl, Kimberley, Nadine, Nicola and Sarah announced that they would reunite as Girls Aloud.

Girls Aloud released a greatest hits compilation album, Ten, in November 2012 and then completed on a UK arena tour in February and March 2013.