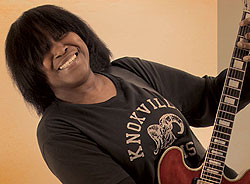 Joan Armatrading is a highly influential British singer, songwriter and guitarist. During almost 40 years in the music business Joan Armatrading has earned herself a reputation as being a masterful performer, with distinctive vocals and consummate musicianship.

Joan's last couple of studio albums have seen her successfully venture into the genre of blues and folk rock - reaching the top of the US Billboard Blues Chart on two occassions. Joan Armatrading will release her next album in 2012 and it will be accompanied by a UK-wide tour during the autumn.