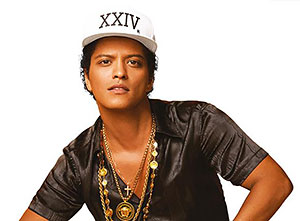 Hawaiian singer-songwriter Bruno Mars released his debut album, Doo-Wops & Hooligans, in 2010. The album propelled him to worldwide fame with the smash hits Just the Way You Are, Grenade and The Lazy Song.

Bruno last toured the UK in 2013 during his Moonshine Jungle World Tour.

Bruno Mars played the UK & Ireland's biggest arenas in April and May 2017 during The 24K Magic World Tour.