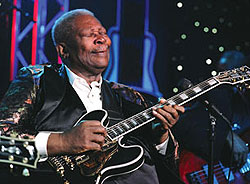 B.B. King is a legendary American guitarist and singer-songwriter, who is often referred to as 'The King of Blues'. When playing Lucille, his trademark Gibson electric guitar, B.B. King has developed an unmistakable style, which has led to him being hailed as one of the greatest guitarists of all time.

B.B. King's career spans more than six decades and during that time he has recorded more than fifty albums, many of them now considered to be classics. Prior to his 80th birthday B.B. King was a prolific touring artist, notching up an average of over 250 concerts per year.