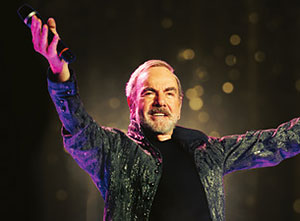 Neil Diamond is a Grammy Award-winning American singer-songwriter, whose many hits include Sweet Caroline, Cracklin' Rosie and Love On The Rocks. In his 50+ years in the music business, Neil Diamond has sold more than 130 million albums worldwide, making him one of the most successful artists ever.

Neil Diamond will release a 3 CD 50th Anniversary collection in March 2017. This will be followed by a UK & Ireland arena tour in October 2017.