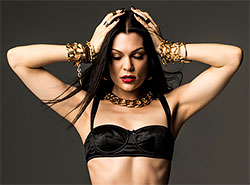 English singer-songwriter Jessie J started out in the music business by writing songs for other well known artists. Then, in 2010, Jessie J released the single Do It Like a Dude and her career as a solo recording artist took off.

Jessie J completed a UK tour in January 2015, when she performed in Glasgow, Newcastle, Manchester, Leeds, Birmingham and London.