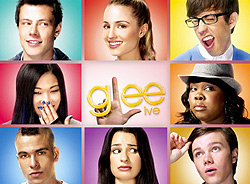 Glee is the hugely successful musical-comedy series from the US which centres on a high school glee club, New Directions. The pilot was first broadcast in May 2009 and was met with immediate praise. The first series was nominated for four Golden Globes, nineteen Emmy Awards and 63 other awards.

As of January 2011, Glee had placed over a hundred songs on the American Hot 100 Weekly chart, a feat that has only be surpassed by Elvis Presley.

Glee Live! was the cast's first live arena tour. The show toured the UK in June 2011.