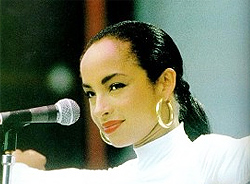 Sade is a British R&B band originally formed in the early eighties and takes its name from the lead vocalist, Sade Adu. Their debut album, Diamond Life, released in 1984, reached the number two spot in the UK album chart but achieved a 4x Platinum status. Sade's follow-up album, Promise reached the top spot in the UK album chart the following year.

Following a few years break between 1996 and 2000, Sade returned to the music scene to perform at the MOBOs. This triggered their comeback and they released their fifth album, Lovers Rock, the following month.

Another break was taken until February 2010 when Sade released their latest album, Soldier of Love, from which they played the title track on the Friday Night with Jonathan Ross show.