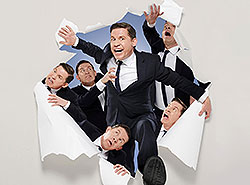 Lee Evans is one of Britain's best loved and most popular comedians. Lee initially rose to fame in the early nineties when, in 1993, he won the Perrier Comedy Award for his shows at the Edinburgh Fringe Festival. His comedy routines are delivered in hugely energetic, manic style.