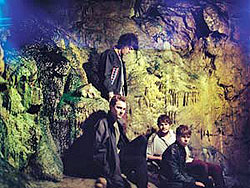 The Klaxons are a four-piece alternative rock band from London, who, following the release of their debut album Myths of the Near Future, picked up the Mercury Music Prize in 2007. The judges said that the band had taken them on an "ecstatic musical adventure”. The album itself reached number 2 in the UK charts, further confirming the band as one to watch for the future.

The Klaxons then went on a three year long musical adventure of their own, during the recording of their second album, Surfing The Void, which was released in August 2010.