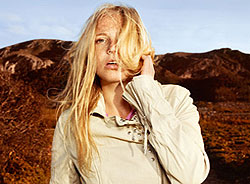 Lissie, the highly talented American singer-songwriter, hit the headlines in June 2010 when she released her debut album, Catching a Tiger, to critical acclaim. Lissie has been compared to Stevie Nicks and Chrissie Hynde, with her powerful bluesey vocals.

Originally from Illinois, Lissie moved to L.A. at the age of 21 to find her fame and fortune, but after years spent playing local bars and clubs, widespread success had still not arrived.

Then in 2007, Lissie came to London and was signed to Columbia records, who immediately saw the potential of her soaring folk-rock sound. From that point forward Lissie's career began to take off, and following the release of two EPs (in 2007 and 2009), Lissie's music started to penetrate the airwaves.

Lissie's debut album, Catching a Tiger, garnered much praise following its release in June 2010, with such comments as: "A stunning debut album" - Sunday Mercury, "Brilliant" - Evening Post, "The perfect record for sunny days..." - The Northern Echo, and "She sounds like one of the greatest female vocalists of a generation" - BBC.

Lissie will be supporting The Script on their September UK tour, before she embarks on her own UK headline tour later in the year.