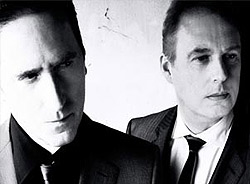 OMD - Orchestral Manoeuvres in the Dark - was formed in 1978 by Paul Humphreys and Andy McCluskey. The final two band members of the original line-up, Martin Cooper and Malcolm Holmes, joined the group in 1980 and the four remained as the core of the band until 1989 when all but McCluskey left. Andy McCluskey kept the OMD name and continued to tour and record until 1996 with various new group members including Dave Hughes and Nigel Ipinson.

In 2005, OMD announced that the original line-up were regrouping to embark on a series of tours and new recordings. Their 2007, 2008 and 2009 tours were sellouts. Their 2010 tour in October and November looks like it is going the same way too.

OMD hit the mainstream just as the new wave of electronic music was developing and were responsible for releasing some of the rawest and most original synth pop. Albums include Architecture and Morality, which went platinum in the UK, Sugar Tax and Dazzle Ships. Their 1988 compilation album, The Best of OMD reached number two in the UK album charts.

OMD failed to reach the number one spot in the UK singles charts but their best-known single Sailing on the Seven Seas reached number three in 1991.