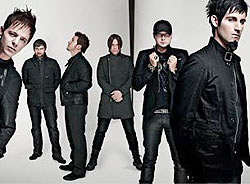 Pendulum are an electronic-rock band formed when a group of like-minded musicians, based in Western Australia, joined forces in 2002 to create a new sound that fused drum & bass with rock music. The unique sound that Pendulum have developed is best experienced live. Pendulum's live performances are highly acclaimed for their mixture of raw energy, thumping tracks and clever use of on-stage technology.

Pendulum have released three studio albums in total. The band's most recent album - Immersion - reached the number one spot in the UK album charts following its release in May 2010.