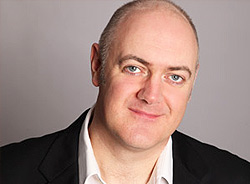 Irish comedian, Dara O Briain is best known for his role as the quizmaster on BBC's Mock the Week. His quick-witted humour has earned him a place at the top of the British comedy circle. Dara attended University College, Dublin where he studied theoretical physics and maths, something that he hasn't introduced into his stand-up routines... yet. Dara has made several other television appearances including hosting Have I Got News For You and Live at the Apollo.