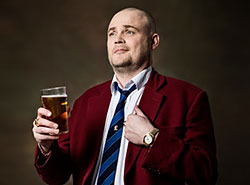 Al Murray's stand up character, The Pub Landlord, is a caricature of the stereotypical licensee who has a morbid fear of foreigners. The Pub Landlord has helped Al Murray become one of Britain's best comedians and anyone who has seen his live performances would have to agree.

In 2012, Al Murray toured the UK with his live stand-up show The Only Way Is Epic.

Al Murray's brand new stand-up show, One Man, One Guvnor, will be touring the UK's theatres in the autumn of 2014 and again in the spring of 2015.