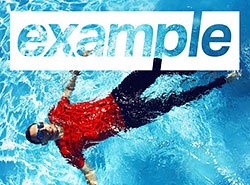 London-born rapper Example is so named because the initials of his real name, Elliot Gleave, form the abbreviation e.g. (for example). Example has released five studio albums – including the platinum selling Playing in the Shadows which reached No.1 in the UK chart in 2011.

Example's fifth studio album, Live Life Living, was released in July 2014 and reached No.1 in the UK Dance chart.

Example completed a mammoth UK tour during the autumn of 2014, performing 27 shows across the length and breadth of the country.