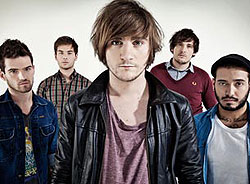 When Kids In Glass Houses first came to prominence in 2007, Kerrang! magazine named them as one of 'The Hottest New Bands On The Planet'. Since then the South Wales based indie-rock quintet have released two albums - Smart Casual in 2008 and Dirt in March 2010. Both albums were very well received and have helped to cement their reputation as a band who are definitely going places.

Kids in Glass Houses will release their eagerly anticipated third studio album, In Gold Blood, on 15th August 2011. The album release will be followed by a headline tour of the UK during October.