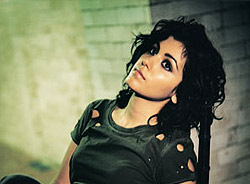 Since breaking into the mainstream in 2003 with The Closest Thing To Crazy, Katie Melua has continued to produce stunning and haunting songs. The album, Call Off The Search, includes a single written about the late Eva Cassidy called Faraway Voice which Katie herself wrote. Katie's fourth album, released in 2010 and entitled The House, has tracks on it written by well-known songwriters and was produced by William Orbit.