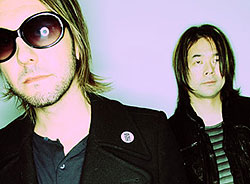 Feeder is a Welsh alternative rock band which formed in 1992. Feeder achieved mainstream success following the release of the album Echo Park in 2001. Feeder has won two Kerrang! awards and three of their albums have gone platinum.