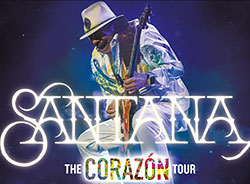 Carlos Santana has been performing his unique style of Latin Rock since 1967. As a band, SANTANA has collected 8 Grammy Awards and 3 Latin Grammy Awards. Carlos has also received 2 Grammy Awards as a solo artist. The band has released more than thirty albums and sold more than 100 million records!

Carlos Santana and his band SANTANA will perform live in the UK in 2015. Santana will play London's O2 Arena on 25th July during The Corázon Tour.