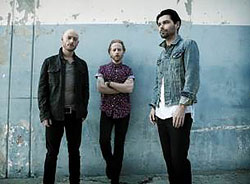 The band has a reputation for being a formidable live outfit, with NME and Q Awards for 'Best Live Band' attesting to this.