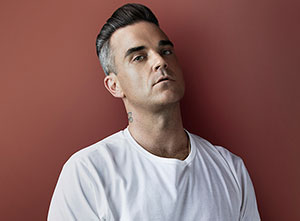 Originally finding fame with Take That in the early 90s, Robbie Williams is now one of the most recognisable and popular British musicans ever. After leaving Take That in 1995, Robbie enjoyed huge success with his solo work. Some of Robbie's best known tracks include Angels, Rock DJ and Millennium.

Robbie Williams will be the headline act at Barclaycard presents British Summer Time in Hyde Park on Sunday 14th July.